Home / Who Knew?: This Penn Alum was “Hottie” on “Flavor of Love” and she’s got an obsession with balls

Who Knew?: This Penn Alum was “Hottie” on “Flavor of Love” and she’s got an obsession with balls 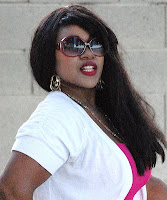 Here’s another one for our “Who Knew” series, as well as our “Pennalicious Profiles” series…

” and soonafter appeared on “Charm School”, but she has created quite the career for herself and certainly knows how to market herself!

As another Penn actor put it, you have to “own it” and be the CEO of yourself.

Schatar is the living, breathing embodiment of this!  And she knows it : )

(A lot) More from Schatar, how much she “loves balls” (you gotta hear this), and her achievements after the jump!

Okay, so there’s a lot going on with Schatar and she certainly puts it all out there …in more ways than one.

See what I’m talking about below…

Schatar is certainly a unique individual and something tells me we’ll be seeing more of her on TV sometime soon.

Alumni producers out there, you’ve gotta have a role for Schatar, no?