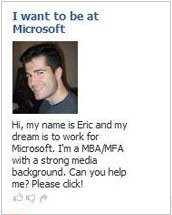 Where most people are sending out traditional resumes to companies, Eric Barker (C’94) used Facebook in the most brilliant of ways for his job search.  Check this out…

Eric recently graduated from an MBA program and to try to get a job, he bought Facebook ads that specifically targeted employees of Microsoft, Apple, Netflix, Youtube and IDEO.  It cost him a little over $100, and so far he’s gotten help from Microsoft employees and other companies who like his tactics.

Per his quote in the The Baltimore Sun,

“Barker, a former Hollywood screenwriter with an MBA, said his Facebook campaign has cost him little more than $100. He’s targeted ads to Microsoft, Apple, Netflix, Youtube and IDEO — basically companies that are in media. He’s gotten contacts and interviews, ironically, with other companies who were impressed by the ad.

He said he “went nuclear” with the Facebook approach because of the rough job market and he needed to get attention quickly. “My background is in Hollywood,” he said. “Nothing in Hollywood gets done effectively through formal channels. Everything is done by friend of a friend and reputation. The real world is not that much different.”

His dream job would be something in product marketing and/or development, he told me.

About his Facebook approach, he said: “We’re all marketers now, like it or not. Getting access [through the Web and interactive social media tools] is easy. It’s now all about marketing and branding yourself.”

And Eric is also going to be featured in the upcoming book “Facebook Fairytales” by Emily Liebert. It’s authorized by Facebook and will have an interview with Mark Z himself. The book covers 25 true inspiring stories of people and Facebook:
http://www.facebook.com/FacebookFairytales

Eric is still interviewing, and encourages any alumni to reach him via his info HERE

Eric also used DuelingTampons.com to get in touch with alumni for leads.  Learn how he did that HERE!