Home / With His Award Winning Script, He Graduated a Year Early to Pursue His Filmmaking Career (VIDEO)

With His Award Winning Script, He Graduated a Year Early to Pursue His Filmmaking Career (VIDEO)

Hollywood alumni.. set up a meeting with this young filmmaker, because he’s going places…

Kevin McMullin (C’09, in picture below in tanktop) is another story of talent combined with motivation and perseverance with all the potential of lots of Hollywood success.  With his Penn award winning script and some great short films under his belt, Kevin decided to graduate Penn a year early to pursue his dreams. 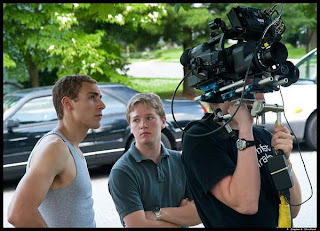 Thanks to the digital revolution and through lots of favors, Kevin has been able to make his feature film Exit 117 for less than $850. The film is an ensemble comedy-drama in the spirit of Rob Reiner’s “Stand By Me” and Richard Linklater’s “Slacker” about a group of recent high school graduates coming to terms with where they are and where they’re going in their lives.

…If you forgot, early last year, Kevin’s short film “The Boy and The Star” was my #3 pick in in my series: Top Penn Videos that will give you the chills.  As you’ll see in Kevin’s trailer above, this film also has a very special artistic feel that will be sure to move you!

How did Kevin get his start and what’s his plan now?

“I have been making short films since I was a 12 years old with friends and after high school I chose Penn over film school to get a broader liberal arts education. While I was there I won first place at the Greater Philadelphia Student Film Festival two years in a row, which funneled my shorts into the international Philadelphia Film Festival.

I decided to condense my time at Penn into three years to pursue filmmaking and put money toward this endeavor. I wrote the screenplay for this feature in my Intro to Screenwriting Class with Kathy Van Cleve and kept rewriting over the next year. It won the 2009 Flesch Screenwriting Award at Penn. With this prize money and some savings I shot “Exit 117” for less than $850 on lots of borrowed equipment and natural sunlight.

This is another example of Penn undergrads working together. Kevin teamed up with friends:

Hollywood Penn alumni, feel free to get in touch with Kevin here: kevinjamesmcmullin@gmail.com

More of posts from my “Penn’s REEL deals” series