You’re Never Going To Guess What Activity Guys Had to Actually Sign Up For in 1929! 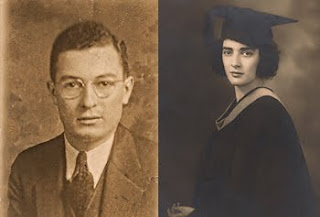 Back in September, I introduced all of you to Joan Myerson Shrager (College for Women, School of Education ’60). 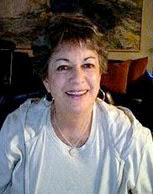 Joan emailed me to let me know that her family is now 3 generations at Penn (Joan; her parents Ruth Leone Meyers Myerson (College for Women ’30) and  Adolph Myerson (Wharton ’29); and Joan’s son Steven Gold (C’85)  …and shared with me exclusive photos and stories passed down to her of what Penn was like when her parents went.

Back in September we learned what good grades from Wharton earned Joan’s father in 1928.

Today, Joan fills us in on: 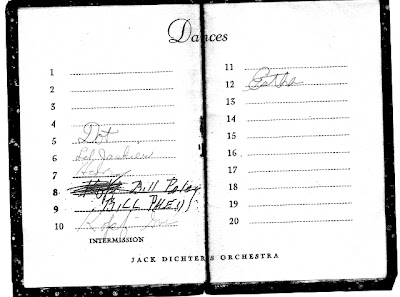 Guys had to sign up to dance with young women. (only girls had these cards) Popularity was determined by a filled, signed dance card.

“My mother saved several filled ones.  The dance card listed all the assigned dances. William S. Paley (who became CEO of CBS broadcasting, in my father’s class at Wharton) had a crush on my mother but she already had a relationship with my father and wasn’t interested. Of course she never dreamed what would become of him but she always said she never regretted her choice.

[On the dance card image above] Number 8 is Paley. It looks like the next one is him too but I don’t know for sure. She always told me that 8 was Paley.”

As you’ll see on the card, I saw some girls names listed.   I asked Joan about this and she tells me that

“Maybe my mom put her girlfriends on the card to keep dances open for my dad who was collecting tickets and not dancing with her. Her boyfriend told her that was because her soon-to-be husband Adolph couldn’t dance. Later he became a good dancer. She taught him and later me how to dance. One of my favorite photos is of them dancing at their 50th.”

More “Blast From the Past” posts HERE

“Now and Then Thursday” posts HERE