Home / You’ve Never Seen Any Building Built at Penn Quite As Fast As This One! (TIME-LAPSE VIDEO)

You’ve Never Seen Any Building Built at Penn Quite As Fast As This One! (TIME-LAPSE VIDEO) 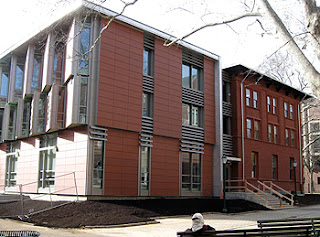 Since my days at Penn, there’s always been expansion and all sorts of construction around campus.

After the jump, take a look at a fantastic time-lapse video of the construction of the music building on 34th street!

Much thought went into the construction of this new building.  Per planphilly.com:

“One of the primary concerns for the Music Building was acoustics, explained university architect David Hollenberg. The most demanding requirements were addressed in the new section, which houses classrooms, practice rooms and recording studios. The old building is now mainly faculty offices. But both sit on a street that leads to the emergency room of one of the region’s busiest hospitals. The use of high-performing interior storm windows and sophisticated construction involving thick floors and “massive sandwiches of air space” did the trick. “It’s astonishing to me how quiet it is now with ambulances going by with sirens whaling.”

…If only they had a time-lapsed video from the years of the refurbishment of College Hall from the 1990s!

More videos of Penn Campus Construction over the years HERE