Home / Begging, Bamboozling, and B.S.ing: How to Cheat the Badge System at Cannes

Begging, Bamboozling, and B.S.ing: How to Cheat the Badge System at Cannes 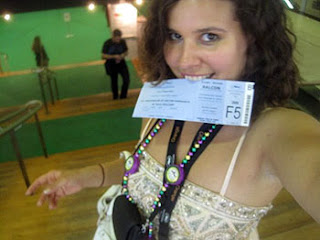 Yesterday, our Penn in Cannes 2010 DT correspondent Chloe Castellon (C’11) reviewed some of the winner and horribly awful films of this year’s film festival.

In today’s post, Chloe talks about the badge system and how to con your way into some of the better theatres.

More insight (and photos of some of the theaters to avoid) from Chloe after the jump!

>”As explained by previous DT correspondents (here and here), the Cannes Film Festival is an exclusive affair, one which grants access based on a hierarchal points system which takes into account status in the industry and status within the festival.

The ‘Cinephile Badge’, the only badge available to pure film fans and students, allows the very least access. Technically ‘Cinephiles’ should only be allowed to use a few main theatres and certain ‘Cinephile’ theatres that are at least fifteen minutes out of the main town and many times are falling apart with graffiti, duck-taped seats, and little to no air conditioning. The worst part about these ‘Cinephile’ theatres is that they only play films with French subtitles, so if you don’t speak the film’s language or French, the films played there are impossible to watch. I would suggest avoiding these theatres by trying to beg, bamboozle, or B.S. your way into better theatres, all with English subtitles.

To get into any other main festival theatre a ticket is required. The Cinephile tent provides tickets for special screenings and sometimes main competition films if you can get there early enough to get them before the swarms descend.

To summarize, don’t be shy about begging, asking industry professionals to say that you are with them, or telling fabulous lies about what distribution company you work for or who you are friends with. Worst case scenario, the Debussy and the Theatre Croisette are excellent fallback options, and in the very worst case scenario, there are the Cinephile theatres.”