Home / Get an early glimpse of Penn’s new expansion (video!)

Get an early glimpse of Penn’s new expansion (video!) 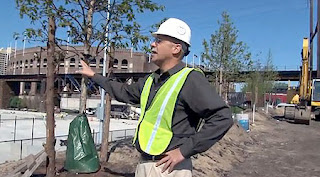 Over the years, we all know there always is lots of construction on Penn’s campus. (they were working on College Hall for all 4 of my undergrad years!)

In 2008, DT started to cover the beginning of Penn’s eastern campus expansion here.

After the jump, watch the new video Penn just released covering the progress they’ve made thus far with Penn Park.

This is going to be huge!

In the video tour above, Mark Breitenbach, Senior Project Manager of the park, explains the various special features of the park.

The park, which lies on the east side of campus between Walnut and South streets, is the centerpiece of the University’s Penn Connects development plan

The next phase of Penn Park construction will feature the installation of synthetic turf on the multipurpose athletic fields and the surfacing of the tennis center’s 12 competition and recreation courts. Electricians are currently installing underground cables that will power the tall stadium lights, while paving has begun on the walkways that will weave through the park’s fields and landforms.

As grass seed and sod are applied in the summer months, members of the Penn community will begin to see the eastern part of campus grow even greener.

…I’m hoping we’ll be able to see a time lapse video of Penn Park’s construction like we did with this Penn buildling.