David Koff (C’91, Mask and Wig, Friars, DP) has been producing a show in Los Angeles so unique that it has attracted the talent of such actors as John Larroquette, Fred Willard, Jeff Garlin, Dean Cain, as well as “Kids in the Hall” actors Mark McKinney, Kevin McDonald, Dave Foley and Kevin McDonald to name a few…

Dave’s “Fake Radio” is a troupe of talented actors, comedians and notable guest stars who re-create live, staged versions of radio broadcasts from the 1930’s – 1950’s in period costumes. Their performances use actual transcripts from the radio shows, including all of the original commercials, and often include unexpected improvisations. 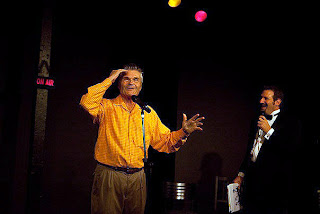 And this month, Dave has joined forces with another Penn and Mask and Wig alum, Chris Heisen (C’91, Mask and Wig) in producing “Fake Radio”‘s full month-long theatrical engagement. Apparently there’s an SNL “Conehead” alum participating in the show..

Dave’s story from Penn to now is an eclectic one and yet another story of how everyone’s path in Hollywood is unique. Per Dave:

“I moved out to Los Angeles after graduating from Penn in 1992 . Since that time, I’ve co-written and sold a screenplay to Fox; appeared on a variety of TV shows from the mundane to the important; done stand up at The Improv, The Comedy Store and produced some inventive theatre based on the sketch and improv work I did during my stint in Mask and Wig. Ten years ago, I was invited to join the cast of a show (“Fake Radio”) that was so good, that when the creator and producer left town, I carried on the show for him.

In the next 2 weeks, Dave’s troupe will be recreating “The Philadelphia Story“, “The Lone Ranger“, “Meet Me in St. Louis“.

Read a great review from the LA Weekly HERE +/- 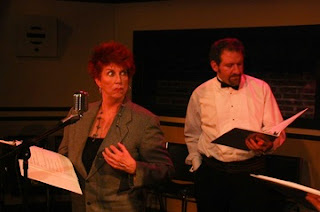 This is one of three productions (with Meet Me in St Louis and The Lone Ranger) Fake Radio is staging for their new season. This troupe specializes in authentic recreations of broadcasts from the “golden age of radio”, cum stylish period costumes, scripts held-in-hand, commercial breaks, and a palpable sense of infectious goofiness. Co-produced and directed by David Koff (who also performs), the show boasts an outstanding cast and an alternating line-up of guest stars (the night I attended, Marcia Wallace did the honors). Opening the show, a trio of ladies took their place in front of three on-stage microphones and sang a rendition of “Rum and Coca-Cola,” a song popularized by the Andrews Sisters. They were followed by an episode of The Adventures of Superman, with the funny Jon Stark as the caped superhero, and Dave Cox as Batman. Denny Siegel was a blast as Tracy Lords, the ditzy socialite whose pending nuptials precipitate a comic run in with her ex husband (Koff), fiancée (Stark) and family in The Philadelphia Story. Koff mentions early on that the script has been tweaked for effect, but it’s very difficult to tell. Everything that transpires, even the breaks for sponsor Lux Soap and war bonds, have a delightful tone, and feel of authenticity. Dan Foegelle’s sound design is superb. Fake Radio at the Lost Studio, 130 S. La Brea Ave., L.A.; Thurs.-Sat., 8 p.m.; thru Oct. 24. (877) 460-9774. (Lovell Estell III)

Find out more about “Fake Radio” and their upcoming performances HERE

Get in touch with Dave at davidsgenericemail at gmail.com