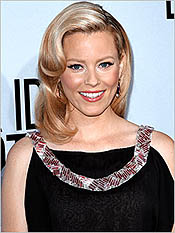 Recently, Liz Banks (C’96) has stepped behind the camera to produce a new film called “Pitch Perfect” (based off of this book) with her Penn alum producer husband Max Handleman (C’95, AEPi), all about competitive collegiate a cappella groups.

After the jump, find out which a capella group Liz references from her time at Penn in an interview she just did with Entertainment Weekly…and listen to the great song this group did that she said was “the most amazing version” she’s ever heard in her life.

From her EW article interview:

“Did you have a magical a cappella experience in college? I mean, some people are horrified the first time they see 12 dudes making music without instruments.
Quite the opposite. The big group on our campus then was the Penn Six-5000 [Banks attended the University of Pennsylvania]. I went to one of their shows and I remember watching this guy sing “Rocket Man” better than Elton John, and thinking, This is the most amazing version of “Rocket Man” I’ve ever heard in my life.”

Now listen to Penn Six’s 1993 version of “RocketMan” from their album “Jacket Off” (featuring Dan Cromie C’93, arranged by Eddie Matz W’93). Thank you to Penn-Sixer Scott Harris C’96 for providing the music!

Sounds great! What do you think?

And if you recall, this isn’t the first time Liz has spoken about Penn in an interview.

Speaking of famous people and Penn Six, be sure to catch up on THIS famous Penn Sixer.