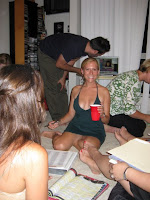 Have you ever heard of an all female fantasy football league?

Jordan Zucker (C’97, Kappa Alpha Theta, captain of UPenn Equestrian team, Stimulus Children’s Theater) has been running one for three years now and has just recently caught the attention of the morning news.  See her segment above.  (In the clip above, Jordan is actually video chatting with another Penn alum Jaime Herman (C’01) for her picks.)

Per Jordan, “We started out as all first timers and learned how to play together. Now we’re schooling the guys.”

If you check out Jordan’s site, you’ll see that she does a weekly video/wrap up which includes:

Incidentally, Jordan is no stranger to TV.  A couple of years ago,  she was featured on close to 10 episodes of Scrubs playing the character of “Lisa” (click here to see her in action!) 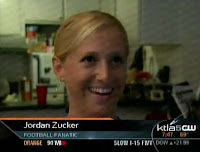 + Follow DT by adding yourself to the “Followers” box at the top left part of the page!

+ New to DT? 14 easy suggestions to get started!

+ See which Penn undergrads and alumni are registered on DuelingTampons.com