Penn Alumni You Should Know About: Vol. 12

David Koff (C’91, Mask and Wig, Friars) is producer of Fake Radio, which reenacts live radio stories onstage all around Los Angeles. On 12/19, he’s at it again with the re-telling of It’s A Wonderful Life. The shows feature an array of popular voice actors and Koff himself (in a tux!). Do yourself a favor and check it out if you’re in the area! Tickets are available here. 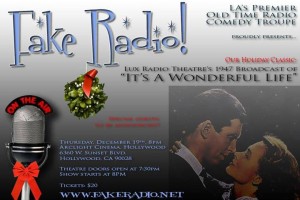 Matt Ritter (L’02) has two new videos to show you all. The first was featured on the front page of site Funny or Die and spoofs new mobile phenomenon Lyft.

The second is his submission to the Dorito’s Crash the Superbowl video contest (view it below), starring his girlfriend (and Penntertainment favorite) Jess Garvey and superstar French bulldog.  Help him get it to the Superbowl by giving it five stars on the actual YouTube page!  After all, commercials are the only reason to tune in. We all know this for a fact.

Sarah Stocker (C’11, Without A Net, Friars) just released and starred in a video on Buzzfeed titled “10 Reasons Holiday Birthdays Are The Worst” (she’s the birthday girl in the hat). As a December baby, I have to agree with her. All of these things really hit home…

Next up: Alumni in Publishing, Digital & more!
[adsense]

One thought on “Penn Alumni You Should Know About: Vol. 12”