Home / Penn Alumni You Should Know About: Vol. 9

Penn Alumni You Should Know About: Vol. 9 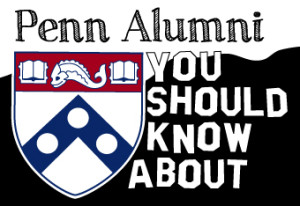 Another volume of “Penn Alumni You Should Know About” is ready to be served up.

After the jump, we’ve got 11 alums doing all sorts of goodness in TV, Literature, Digital, and more!

After creating hilarious video “Women of LA” (below), DJ Lubel (C ’05) has sold a new comedy to Fox. Along with writing partner Jamie Abrams, Lubel is writing Last Night, a single-cam sitcom about four friends who get together each Saturday night to talk about the social revolution. What is this “social revolution”, you may ask? I don’t know. Sorry to disappoint you.

Josh Heald (W ’03) recently sold a pilot to TBS. The Hot Tub Time Machine writer and actor teamed up with Conan O’Brien to create this untitled show about 20-something Connor Logan and his best friends, who team up to re-open an old brewery in their declining town. Perhaps they’ll make brews in the infamous hot tub to save money on props for the new show. Perhaps not.

Roy Bank (C ’94) has a new show I Brake For Yard Sales which premiered on HGTV on 10/13 at 9pm. It’s a new take on the home makeover genre and features antiques, big houses, and cross-country travel. It could be your next guilty pleasure.

Next up: Alumni Authors, Filmmakers