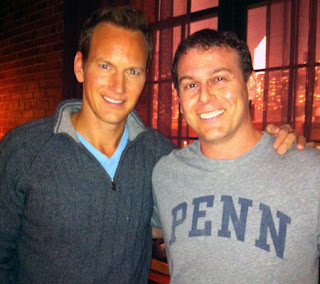 For the last few years as a medical consultant on various shows Penn alum Zach Lutsky (C’96) has had the opportunity to write or re-write all the medical scenes in those shows.

After the jump find out how Zach has finally gone from a consultant to a full time writing staff member on “A Gifted Man”!

His first episode, “In Case of Blind Spots” airs tonight (Feb 3) at 8pm on CBS!

>”It has been an unbelievable experience but I have been waiting eagerly for the first chance to write a script on my own.  On my last show, “Miami Medical,” I got close.  The showrunner had me write a spec script.  I was thrilled when he read it and liked it and he promised me my own script in the second season.  The second season never came.  When I got hired on “A Gifted Man” I again was hoping for the chance to write.  The executive producer fought for me and this time I was promised one of the last scripts in the original order of episodes.  I waited nervously week after week, scared that we might get cancelled before getting to my episode.  Fortunately, the show and my episode made it.  I got to take time off from my hospital duties and spent nearly three weeks in New York shooting a script I had written.  It was amazing and surreal!  I am happy to say that I have now been officially made a member of the writing staff and can’t wait until I get the chance to write again.”