Home / Penn in Cannes: He Begs and Scores The Hottest Ticket in Cannes

Penn in Cannes: He Begs and Scores The Hottest Ticket in Cannes 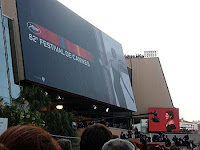 Over this past week, our DT correspondent Brian Tran (W’10) has talked about how he got into screenings without too much begging, how tears welled up in everyone’s 3D-glasses-covered-eyes, and the hot and not-so-hot movies of Cannes.

In today’s post, Brian sums up his Cannes experience, reveals something that made him squirm and scream, and reveals how begging got him the hottest ticket in town!

Every year at Cannes, there is a film that raises the ire of cinephiles and critics alike, prompting outcry and controversy. Last year, we had the divisive Serbis, directed by Brilliante Mendoza. This time, crazy/brilliant auteur Lars Von Trier (Dancer in the Dark, Dogville) brought the goods and thrilled audiences with his aptly titled Antichrist. Known as the film that got Von Trier out of his clinical depression, Antichrist was probably the hottest non-Hollywood ticket at Cannes. Although I certainly had perks with my festival badge, I was not able to net an invitation using the online invitation system meaning I had to resort to alternative means. Once again, I pulled out my blank sheet of paper and my Sharpie and drafted up a quick sign asking for an extra “Antichrist” ticket.  As I staked out my old begging corner from last year, I realized how odd it must have seemed to see a student in a tuxedo holding a sign that read ANTICHRIST on the streets of Cannes. Fortunately, it was my lucky day and I was given a fantastic orchestra ticket within fifteen minutes. 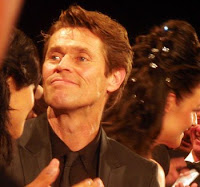 Inside the Grand Lumiere Theater, I was thrilled to discover I was sitting in the same row as the filmmakers and actors, just on the aisle. Willem Dafoe, Charlotte Gainsborough, and Lars Von Trier were seated only feet away from me during the film. Mick Jagger was mingling with his guests in the row in front of me (see picture below). During this intense psychological horror film, an unnamed couple (Dafoe, Gainsborough) deals with the grief of losing their only child. There were several scenes that drew visceral reactions from the audience, causing me to squirm and scream. The filmmakers of Hostel and Saw could learn a few lessons from Von Trier in terms of torture and pain. After a particularly horrific moment when I jumped and shrieked aloud, I hear faint laughter coming from my left. I turn my head to discover Lars Von Trier himself watching me curiously and giggling at my expense.  Probably not a film I would ever see again, I would recommend Antichrist to fans of Von Trier’s previous work and those who wish to subject themselves to psychological and emotional scarring. The film is gorgeous and well made, but I definitely recommend with caution.

On another note, I do wholeheartedly recommend this year’s Palme d’Or winner, Michael Haneke’s The White Ribbon, a subtle, yet riveting look at the everyday lives of a small Protestant German village on the eve of World War I. The austere black and white cinematography matches the reserved emotional oppression found in the faces of each child that would eventually grow up to become a Fascist. Definitely a slow burn film in which events gradually build over a two-hour plus length, The White Ribbon takes its time revealing its cards but every moment is used exquisitely and no frame is expendable.

The 2009 Cannes Film Festival certainly had its highs and lows, but it was a completely different experience this year compared to last.  I had a different agenda that did not require me to watch films wall to wall and I was able to access areas of the Festival that were not available to me previously. At last year’s Festival, I met my close friend and collaborator Courtney Terwilliger (C’10) who involved me in the making of her latest short, “The Power of Freedom.” Our film was entered into the Short Film Corner and the Film Market of the Festival, allowing me a unique insight into the innards of the Festival. Although the glamorous competition films attract the most attention from the media, the Market was definitely the iceberg beneath the red carpet waters. I watched independent filmmakers clamor to arrange meetings with buyers and potential backers to fund future projects. There is so much involved with getting a film made that goes unseen by audience eyes. Perhaps one of the ambitious directors I met in passing could become the next Palme d’Or auteur.

Cannes has given me the motivation to continue on my path toward a career in entertainment. Before coming to France last year, filmmaking seemed a distant dream, one that was almost impossible to achieve. Now, after meeting with Penn alums such as CAA head Rick Hess (C’84) and Geoffrey Gilmore (C’74)  who have made fantastic careers in this industry, I have renewed aspirations and high hopes for the future. This summer, I’m interning at International Creative Management (ICM), an option I discovered last year when our class met with ICM CEO Jeffrey Berg, a Penn parent. Although I’m far from a Cannes veteran, I learned a thing or two about film festivals and the entertainment industry in general. Hopefully, I will be visiting the beaches of the French Riviera for many years to come.

P.S. While you’re catching glimpses of Penn in this summer’s Transformers 2 (see photos from shooting on Penn’s campus HERE, keep an eye out for me too! I’m an extra in the college scenes, so look out for my big screen debut!