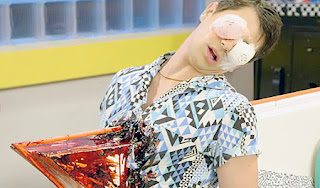 We’re talking awesome films about Trojan condoms, a very NSFW short with Scott Baio, a film with the real Jersey Shore cast, and another NSFW film about “love needing a hand.”

Jake just launched “NEW ROMANCE”, a new video you MUST watch which has all the cheesiness of “Saved By the Bell” combined with the horror of the Final Destination films.

After the jump, check out the video and find out how Jake got to do this short for Warner Brothers!

The interesting thing here is that Miles Fisher, the Tom Cruise-y looking star (and Harvard alum) of Jake’s “American Psycho” spoof is the new star of the upcoming film Final Destination 5. (Miles has also appeared in “Mad Men” a couple years ago.)

Per Deadline, “After Miles went to Warner Bros with an idea for a short that could help spread awareness of its upcoming Final Destination, the studio gave him the money to make the film.  Fisher put together his American Psycho producer Jake Avnet and director Dave Green and they’ve made New Romance.”


Find out how Jake got his start as a producer HERE