THE PENN MAFIA and The Offer Not to Be Refused (must read!) 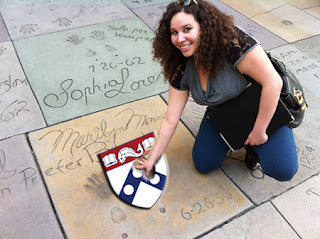 A couple weeks ago, during her spring break, I met with Chloe Castellon (C’11), a senior about to graduate from Penn looking for advice on how to navigate through the Hollywood job market using Penn alumni.

That week, Chloe was on a mission to take as many meetings as she could with Penn alumni in anticipation for her post graduation move out to LA.blush

After the jump, take a lesson from Chloe and find out how she scored 50 meetings with some of the most successful Penn alumni in the industry.

First, you may recall that Chloe did an awesome job blogging for us last year at Penn in Cannes 2010.  She is not only about to graduate, but before she does, she’s producing and directing her own short film. She wrote the short for film school applications, and recruited a crew of twenty five local professionals, film school students, and friends to produce it. She has been active at Penn, editing for F-word Feminist Literary Magazine, chairing publicity efforts for Penn’s Consortium of Undergraduate Women, and currently acting as Director of Entertainment for UTV, Penn’s television station. She is currently interning at Lionsgate, and is hoping to secure a job in the film business upon graduation.

In the the post below, Chloe identifies the various methods she has used to research and meet with Penn alumni. These tips are for both undergrads and alumni:

“There’s a common misconception that a Penn degree will do nothing for you if you want to work in film and entertainment. Well, I’m here to tell you that’s a big, fat lie. Out here in La La Land (and New York for that matter), there exists what people call the Penn Mafia, and you, my friends, are the wannabes. While you might not think ‘Sopranos’ when you think of Penn grads, there are a whole slew of industry professionals kicking ass and taking names, and best of all, they help each other and work together, just like any respectable mafia family.

I’m a girl from South Florida with little to no connections in the industry, but because of my Penn degree, when I came out to Los Angeles during my spring break I had *fifteen* meetings setup before I got here, and I have upwards of *thirty five* more set for when I move out here permanently.

So how do I get more than fifty coveted meetings with some of the most successful people in the industry, you ask? Well there are a couple of key resources at your disposal that all of you should know about.

1) The first, and most obvious considering you are already here, is the site ‘Penntertainment’. In the words of M a t t R o s l e r himself this is “the Deadline of Penn alumni news in entertainment,” and if you don’t know what Deadline is, google it. Now. More than just Penntertainment, however, there is Matt, its creator. He is very well established within the Penn Mafia, and moreover he is able and willing to help you. So email him.

2) The second resource is PACNET. Pacnet can be found on Penn’s career services page, and it connects you with people who have explicitly agreed to either help get you a job, potentially hire you, or give you advice. Many of my most valuable mentors were found on Pacnet, and it’s an easy way to meet people because they are already a willing audience.

You should also check out similar Penn sites like Quakernet and other resources listed on the career services page; especially check out the past entertainment panels Career Services lists under entertainment, and try to contact those people through facebook.

3) The third resource is Penn’s entertainment programs and staff. Penn-in-Cannes is a program that will show you the time of your life, and introduce you to limitless contacts, both from Penn and outside of it.

Wharton Media and Entertainment club often has events or outings that connect you with industry professionals, and joining the listserve is free.

Also (undergrads) join the Communications listserve because they require an internship as part of the major, and strangely they circulate info about film and entertainment internships much more than Cinema Studies.

The Cinema Studies department frequently holds events in which famous Penn-affiliated producers, writers, directors and other industry professionals come speak on campus and most times they give out contact info. Many Wharton, Cinema Studies, Communications, and Fine Arts professors have also been involved in the entertainment industry in the past, so it’s a good idea to sift through their websites and contact the ones who were.

4) The fourth and final (for now) resource you should look into is the variety of clubs and groups offered to Penn alumni. Once you move to L.A., you should join the Penn Club L.A. and go to events to network with other alumni; same goes for New York.

Once you’ve exhausted these resources and have wrangled yourself your own fifty meetings (and another thirty phone calls), all you have to do is make the most of that interview, something I’ll address in a future post. But remember, in the words of one of my mentors, “every call [and meeting] is a failure if you don’t leave with another contact.” In this business it’s all about who you know, and with your Penn degree you can come to know the Penn Mafia, some of the most powerful people in entertainment, and that is an offer you can’t refuse.