Their Facebook Pop Song Battle and his life after Penn 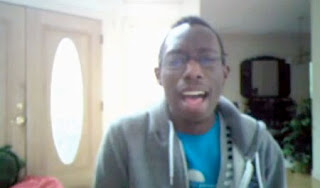 Recently on DT, I featured Rebecca Cook (C’11, Counterparts) a super talented new alum who did an awesome cover of an Adele song.

Turns out over the past 2 years, Rebecca has been involved in a friendly “pop song battle” with another super talented Penn (and Counterparts) classmate of hers.

After the jump, meet Johnny Lloyd (Mortar Board, Counterparts, iNtuitons ’11) and check out his soulful cover of “Bills Bills Bills” by Destiny’s Child.

Also, learn about how this recent grad is transitioning to life after Penn and keeping it in the arts with some other Penn friends of his.

Per Johnny, “The basic idea of the pop song battle is that we take random popular songs and cover them acoustically, basically trying to one-up each other in a) ridiculousness and b) creativeness. Rebecca and I love friendly competition, and the battle is definitely that.”

And check out another great performance by Johnny’s in Counterparts covering Alicia Keyes’ “Falling”:
What is Johnny doing now that he graduated? He’s keeping the Penn spirit alive by working together with other Penn alumni:

“Will Steinberger (Friars, PennQuest, iNtuitons ’11) and I just started our own theatre group in Philadelphia.   InVersion Theatre is dedicated to producing exciting works, both new and old, focusing on a literary method of analysis both inside and outside of the rehearsal room.

Will and I started working together in college with iNtuitons, and for us. InVersion is an extension of that. (We also have a few other iNtuitons and Penn Theatre alums on board, which is always a plus.) We’re currently gearing up for our first show, “Dutchman”, which is going to be a part of the Philadelphia Fringe Festival. After that, we are uncertain of our schedule, but hopeful – even though I’ve moved to D.C. recently to start working at Arena Stage, both Will and I are extremely committed to continuing the company, and we expect to be lining up a new play workshop series in the winter. (I have a Company Management Fellowship at Arena Stage, so I’m on the administrative side.) We’ve got a video blog accompanying our successful kickstarter where we talk about starting a real theatre company and putting on a professional show. You can see our second vlog (about the beginning of casting) below: