Home / 2006 / Their Indian documentary is something magical

Their Indian documentary is something magical

A couple years ago I did a story on Jim Goldblum (C’07, 34th Street)‘s virtual Katrina Yearbook which CNN said, of all the press coverage and all the documentaries, it was “one of the best of the best.”

Jim has been working on a new compelling project with a fellow film editor Penn classmate, Adam Weber (C’06). They’ve teamed up to produce the feature documentary and interactive narrative, “Tomorrow We Disappear”.

The project chronicles the Kathputli Colony, a tinsel slum that’s been home to Delhi’s acrobats, puppeteers, and magicians since the 1970s. Last year the government issued relocation permits to the colony residents; the slum is to be bulldozed, cleared for development.  Jim and Adam will capture the last remains of this culture born out of folk art and molded by poverty.

After the jump, see what great footage they’ve captured so far. 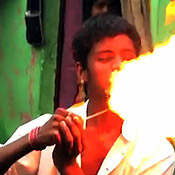 More about Jim and Adam:
Adam is a director and editor, won the Student Film Festival for some a film he did at Penn. He’s been an assistant editor on Inglorious Basterds

and The Green Hornet

, and is working with Gondry as the lead editor on his animated documentary on Noam Chomsky

How did these two team up for this project?
Per Jim,

“We were roommates my sophomore year and his junior year of Penn. We were both doing really well in our respective fields but in any creative industry you can spend your whole life waiting for talented people to get their shit together with an awesome project, or you can go out and do it yourself. And Adam and I were both feeling the compulsion to create impactful, meaningful, conversational content. When I first heard about the Kathputli Colony–first out of some research I was doing on Salmun Rushdie’s Midnight’s Children

–we had our project.”

Check out their latest progress on their blog HERE