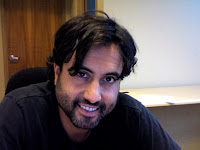 A month ago, Joe shot a pilot for ABC (produced by NBC) called Five Year Plan, that he and his writing partner Joe Wiseman created and exec produced together. It stars Steve Howey, Will Sasso, Brooke D’orsay, Lee Thompson Young, Joy Osmanski and Steve Rosen.

“The basic idea is we introduce this young group of people, we learn what their respective five year plans are, and then we watch them as they try to make those dreams come true. The pilot was directed by Gail Mancuso. We’re all done editing itnow and have gotten a lot of good feedback so far (my mother Phyllis Port (C’60) claims, “It’s a winner!”). We should know pretty soon whether or not it will be picked up to series.”

Before this, Joe worked on The Office, Just Shoot Me and per Joe, “many shows that you’ve never heard of.”