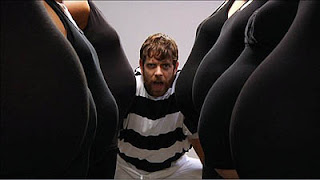 After his short film was nominated for an Oscar in 2006, Rob Pearlstein (C’95, DP) went on to create another funny film that caught our attention.

Now, Rob has created what seems to be a sure viral video sensation called “She Gotta Bump”, a song as he says, “for all you beautiful pregnant ladies”.

Watch this very funny video after the jump …and his reference to pickle farts. (look out for Rob in minute 1:57)

On a related note, the pregnant woman who plays the main love interest in the video is Rob’s actual pregnant wife, J. Robin Miller!   Rob tells me that she gave birth to their son 8 days after the film was shot!

More about Rob’s beginnings in the industry HERE