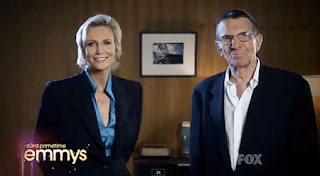 You may have heard that Alec Baldwin backed out of the opening sequence for the opening of this year’s Emmys last month and Leonard Nimoy stepped in last minute.

And Spock isn’t the only one who helped reshape this opening scene days before the big event.

After the jump, get to know a Penn alum who was asked to step in last minute and direct this new opening scene …and find out his path from Penn to Hollywood! 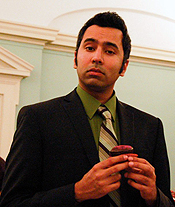 Kabir is a director and editor with credits on nearly 300 hours of television. His work includes “Unsolved Mysteries”, “The Academy Awards”, “The Daily Show”, “Mumbai Calling”, and “At the Skywalker Ranch” (a short film for Comedy Central/Lucasfilm).

What was Kabir’s path from Penn to now?

“At Penn, I spent a lot of time in the theater (probably more than I did in class).  I mostly did lighting design for Stimulus, Arts House, and Intuitons, and was on the Intuitons board (and I worked at Discovery Discs for three years, may it rest in peace). After Penn- I went into a master’s film program in Florida, and moved to LA afterwards.  I started out editing, and over the years have edited and directed many different shows (scripted, reality, commercials, documentary, etc).  I was editing the opening film for the emmys, and we got official word that Alec Baldwin was out on Thursday that week; the Emmys were airing Sunday, and we had to shoot Friday. When our director was unavailable for our Friday shoot, I was asked to direct this new opening scene of the film. Our production team was amazing and pulled together the whole shoot, booking the location and the crew – and Leonard Nimoy – in under 24 hours. It was a fun project, and one I’m very proud to have been part of.“