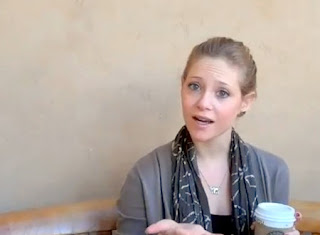 A few months ago we introduced you to Jess Garvey (C’09), DT’s “Starter Reality Star”.

In the last episode, Jess brought us to her manager’s office as they planned for pilot season.

Well since that meeting, Jess has been keeping quite busy!:  She’s booked a national commercial, will be starring in a Funny or Die short and auditioned for another successful Penn alum’s pilot.

Plus she is pitching her reality show to Project Runway producers!

After the jump, watch Jess’s next episode and read a special, somewhat cryptic note from Jess herself.

“What an amazing Month! I booked a national commercial, get it girl, which will be airing in the next couple of months! Wahoooooo.

Unfortunately, I can’t tell you what the product is because the company does not want their competitors to know they have a new campaign. Yup, I learned that the hard way as I tweeted up a little storm and posted all over facebook when I got it. I swiftly got a call from my agent who was like “sweetie I know your excited but shut it.” I felt soooo bad and didn’t say anything that was unfavorable about the commercial but they just don’t want people to know. I was so scared they were going to pull me but thank god that didn’t happen. Lesson learned folks. Don’t be a blabber mouth. Anyway, the shoot was so fun and really nice to finally get something legit!

at the end of the month! I cannot wait to meet the producers behind that crazy animal of a website! The spot is hysterical and very New York Central. I don’t want to give anything away, you will just have to check it out!

Pilot season has been wonderful and I have been able to go in for a lot of great projects that you see in the video. In true Penn love fashion I stalked everyone I know to got an opportunity to audition for Whitney Cumming’s new pilot, which is not titled at the moment. She is an alum covered here on DT and a great comedian and writer!

Now, I am working ongetting in for the new Rachel Bilson pilot as well and I have been busy perfecting my southern accent! You should see me whip out my southern drawl at Starbucks where they know me and now really think I’m insane. I obvi have to practice, what do you expect. The mirror just isn’t enough..you gotta take it out onto the mean streets.

This week, I am starting to take my reality series to a new level. Dah Dah Dahhhhh. Its “The Ashlee Simpson show” meets “My life on the D List.” That surely is the Logline I will be using when I meet with the Executive Producer of Project Runway

to discuss my reality series! I think that description is sooo fitting and ironic because Ashlee is the one on the D list and Kathy is a straight up A in my book! Just a joke smashley, that show was legit one of my favs. A real old school MTV hit! Butttt yess I will be taking myself and my fabulous powerpoint presentation to Full Picture Productions to get some advice on the future of my video series. In my own fantasy world, the producer will be wowed by my material and want to jump on board to really get the series going. I picture applause, a celebration dinner down the street at the Ivy, slash that, The Abby (for those of you who don’t live in LA the Ivy is stuffy, expensive and delicious and The Abby is gay, outrageous and sceneilicious). When I come off of cloud nine, I, in reality expect a lot of really great feedback and ideas to come out of the meeting.

What commercial do you think Jess booked?