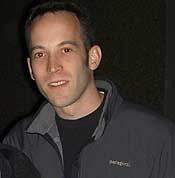 For anyone trying to break into the entertainment business, Jake’s story is another inspirational must-read!

What was Jake’s path to becoming a TV producer?

“After graduating from Penn I desperately tried to crack into the then- small Philly production market with spotty success. Ended up working on a few documentaries, a travel show, a cooking show, educational videos – and, I’m proud to say, several infomercials that never aired. Things picked up when I moved to DC which was just starting to get its legs as a TV town but is now really booming. Got some credits with Discovery, Nat Geo, ended up establishing myself in the crime-show genres, which was great training in terms of developing my sense of story structure. Started as a writer/producer for 2 series and a pilot, then got promoted to series producer on a 20 ep prime time series for truTV. As I was finishing “Suburban Secrets” a show runner I used to work with called with an offer to work on “Paranormal State

” for A&E, but only if I could start right away. So I took a flyer and moved to New York before later finishing the season in post out of LA.

I worked as Supervising Producer and later, Co-EP of “Paranormal State

“, churning out 33 episodes in a year, and when “Ghost Lab

” started up in summer ’09, I was tapped to run the west coast (story) side of the operation. Somehow we made it to air in October and by December had 13 hours in the can. Season 2 started production in the spring.

In the clip above, after sifting through hours of evidence, the Ghost Lab crew spots
an unexplained shadow in a photo taken by Barry Klinge in Gettysburg’s Fairfield Inn.

/>
“Ghost Lab” debuts tonight (Tuesday), October 19th at 10PM e/p, on the Discovery channel and then begins airing in its regular timeslot Thursday nights at 10, starting on 10/21.

, and a bowling alley in North Dakota said to be haunted by its former manager. First episode is set in historic Gettysburg.

More about the show HERE