He Starred in a Commercial With Some of His Idols

Back in October, we started our “An Actor’s Path” vlog series with Penn alum Alex Weber (C’09, Lacrosse).

In my Alex’s last post on DT, he won a contest that landed him an audition in front of a casting director. (Turns out he’s won a part in an upcoming lacrosse movie called Crooked Arrows.)

This month, Alex continues to succeed and in fact, landed a commercial and a new web series you’ll want to check out…

Since Alex’s last post, he did a commercial for Full-Tilt Poker (they’re doing a series of commercials highlighting one professional player in each one.)

“The commercial I was in was with Gus Hanson. Then later in the day I was able to play poker with a few of the other professional players I mentioned so that they could film other shots.” 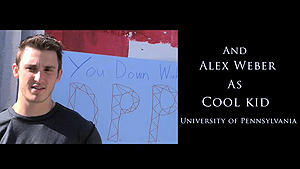 Alex describes it as “‘The Office” taking place at a fraternity.  (it feels a little like a male version of The House Bunny

Delta Psi Pi
Alex’s character gets wooed by Delta Psi Pi.  To sum it up, “Pomegranate or he walks…..”

On a side note…
Hey actors out there, I came across a new free App (for the first 3 scripts you upload) called “Rehearsal” that will help you memorize lines. The guy from “Heroes” who plays the puppetmaster (David H. Lawrence XVII) created this cool app that allows you to upload scripts, highlight your lines and record audio rehearsals of your scenes. During a read through with the cast, record other actors’ bits so that can you can rehearse your lines organically. Record each run through then listen back to experiment with diction, emphasis and timing. You can even add beat marks, or insert photos or video commentary into run throughs.