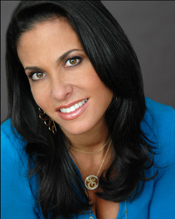 Much has happened since Penn alum entertainment journalist Emily Frances froze her eggs on national TV a few years ago.

Recently, Emily has decided to also put a freeze on entertainment, change careers and do what many Penn alumni do best: become an entrepreneur.

After the jump, learn about Emily’s tasty new endeavor and her Superbowl themed commercial airing which just recently started airing!

You squeeze ketchup and mustard out of a bottle, why not hummus?

Over the past year, Emily has joined forces with her husband Ami Blashkovsky, the creator and self-proclaimed “Hummus King” of Squeeze Z Hummus, the next great condiment.  It’s all about “NO MORE DOUBLE DIPPING!” Their line also includes Babaganoosh, Tzatziki, Tahini etc.  They are also expanding to  ketchup-like packs and yogurt-style tubes for lunches. 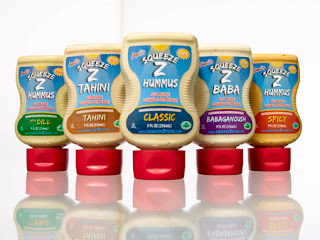 Emily is the head of Media for Squeeze Z Hummus:

“I left WPIX and am reinventing myself as an entrepreneur, putting together my own business while also working full tlme on Squeeze Z.  We are creating a marketplace for using hummus as a condiment on a hotdog, sandwiches, burgers vegetables, even used at BBQ parties.  Potato chips which wont chip with Squeeze Z Hummus. This is the golden opportunity for Squeeze Z to be branded. There is a golden opportunity to show that we are a multi-cultural society, where Ethnic food can be recognized as part of Americana.”

Below, they shot a Superbowl Themed NO MORE Double dipping commercial airing leading up to Superbowl Sun Jan 16-Sund Feb 6.  Check out the two-part 15 second commercials strung together:

Not only does Emily make an appearance above (in purple shirt), but there’s another Penn connection here. Emily recruited the talent of the children of her Penn alumni friends including: Dr. Jodi Gold (C’92), Felice Rosenberg (C’92), Craig Yeshion (C’91) and Greg Shufro (C’91)

The spots will run Monday, January 17 – Monday, Sunday February 6rd on Time Warner and Verizon Fios in NY, NJ, and CT on TBS during Seinfeld and King of Queens,  ESPN,  E Entertaiment Television, The Food Network, Cooking Channel, NY 1, FX and TVLand during the Nanny.  The spots will also air on Fox 5 (NY) during Seinfeld at 11:30 pm and 12:30am..

Remember THESE Penn alumni vying to get their superbowl commercial on air?