Penn Alumni You Should Know About Vol. 18

Alli Shearmur (C ’87) will be co-producing “a supernatural themed film” with Tina Fey that is conceptually similar to Ghostbusters.   Tina certainly seems to get along well with other Penn alumni in film and TV.

Executive producer Tom Heller’s (C’95) latest film Foxcatcher has gotten lots of buzz at Cannes this year. Based on a true story, this wrestling drama features seasoned acting vets Steve Carrell, Mark Ruffalo, and hottie Channing Tatum. So even if wrestling and beautiful storytelling isn’t your thing, you can be sure that a shirtless Tatum will keep you plenty entertained. Here’s hoping we’ll see Penn alum Heller on the awards circuit with this one! 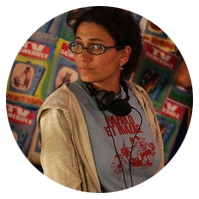 Nothing can or should silence director Rachel Goldberg (C’96)!  She recently directed the short film Muted, the story about a mother who struggles to be heard by the media and law enforcement when her teenage daughter disappears.  The film is a commentary about media discrepancy when a child of color goes missing.  Starring Chandra Wilson (“Grey’s Anatomy”) and Malcolm Jamal-Warner (“The Cosby Show”), not only did the film make its world premier as one of only five short films selected to appear at the HBO American Black Film Festival in New York this past month, but it WON the competition and has been offered distribution on HBO!  Congrats, Rachel!

By now you’ve probably heard that Elizabeth Banks (C’96, Tri-Delt) is not only appearing in and producing Pitch Perfect 2, but she’s also directing it.  Here’s a sneak peek of Liz on the set:

With all the World Cup Soccer buzz happening over this past month, Justin Ching (C’11) produced a video for Fox Sports with legendary boxer Mike Tyson pumped up for the recent US-Belgium World Cup game and had a message for the team below that he hoped would pump them up, too. …We guess the US needed a little more pumping.

We have some young, talented alums in our midst!  Recently graduated Jay Jadick (C’14), Dylan Hansen-Fliedner (C’14), Dane Mainella (C’14), and Benjamin R. Davis (Temple ’14) are raising funds for their film Driving Not Knowing. The film focuses on an unrequited love story featuring two male artists. To add to the drama, one of these characters is a manipulative addict. Check out the trailer below and be sure to donate to these recent grads to make their film happen!

VOTE!:  Be sure to vote for them for IndieWIRE project of the week! (Voting ends Thursday, July 10 at 5PM Eastern)