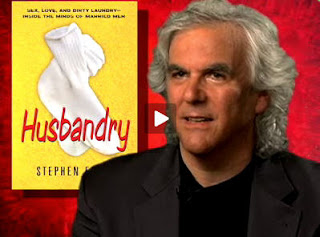 What do America ‘s wives, wives-to-be, and ex-wives want?

, a collection of some 30 essays chosen from Stephen Fried’s wildly popular column in Ladies’ Home Journal.

From his website, “His smart, funny, touching pieces have America’s wives talking to each other in a new way — and talking, in many cases for the first time, to their husbands. Fried’s Husbandry essays illuminate the mysterious and often maddening ways of married men, whether in love, in friendship, in the kitchen, the locker room, or the bedroom. Ranging from the sublime to the absolutely ridiculous, these pieces are wise, tender, and often laugh-out-loud funny.”

Click here to see Stephen’s interview about the book!

Get the book here!

Click to see what other 1979 Penn grads are up to

EVERY JOURNEY BEGINS WITH A PAIR OF SOCKS

Let’s start with my socks. Not the ones I’m wearing, but the ones I wore yesterday. The ones I took off last night and plopped on the floor in the general vicinity of the laundry basket. Yes, those socks. Those size-thirteen socks that are the biggest source of discord in my twenty-year marriage.

When my wife, Diane, comes across my socks — so close to the basket, yet so far from actually being in it — the incredulity begins to bubble up inside her. And then we have “the discussion,” which starts out about socks and ends up being about the evolution of the species. It’s the same place the discussion about the dirty dishes in the sink ends up.

Now, this discussion about the evolution of the species is actually quite fascinating — as long as you’re not in the middle of it. As it begins, Diane, who has a high-school trophy on her shelf for “Best Negative Debater,” poses this query: Are these socks (or dishes) left where they are because I don’t remember she’s asked me a million times not to leave them there, or because I remember being asked, but I just don’t care that it matters to her?

While I’m trying to figure out which response would be better for the future of my marriage (or, as the guys in my regular half-court basketball game put it, “which answer gets me laid?”), my wife, a novelist who also reads a lot of science books for fun, asks a second question. If I don’t remember (which is sounding more and more like the right answer here), is it because I wasn’t listening to her all the times she asked, or is there something wrong with me physiologically — an actual problem with the workings of my brain, some bad sectors on my mental hard drive? Then she notes that studies have shown that men’s brains deteriorate faster than women’s, and at forty-nine, my robust lobes have probably started shrinking to the size of raisins.

By this point in the increasingly one-sided discussion, the correct response is clear.

Okay, put me down for the brain damage.

If only it were that easy to escape the discussion. Usually, I am able to wriggle out of this inquisition because my wife knows that I wouldn’t purposely do anything to make her upset. But I suspect she also privately takes comfort in the smaller brain theory, which is another example of the big lies women tell men about size not mattering.

What I would never tell her, of course, is that while I really don’t remember that I shouldn’t let my socks decorate the floor, I also don’t really care. Sure, I care that it matters to her. But to be perfectly frank, I doubt I’m ever going to really care myself or even understand why it matters to her.

I know there are some men who undoubtedly remember to put their socks in the laundry and believe in that same-day dish-doing thing. One of my two brothers is actually quite neat (we refer to him as “the mailman’s child”), so it is possible for a man to actually care about such things. But most men I know don’t. And won’t.

When it comes to socks or dishes, Diane knows I prefer a good, messy pileup and, after a week (or a month) or so, a really good cleaning. For situations where bacteria and decay aren’t involved, well, what’s wrong with tidying up once a year?

After all, isn’t that where the term “spring cleaning” came from?

I know there are some men who undoubtedly remember to put their socks in the laundry and believe in that same-day dish-doing thing. One of my two brothers is actually quite neat (we refer to him as “the mailman’s child”), so it is possible for a man to actually care about such things. But most men I know don’t. And won’t.

One friend of mine believes that the real issue isn’t remembering or caring, but rather the sheer volume of wifely requests. “Well, they go on and on about so many things — I mean, how can you tell which ones really matter, anyway?” he asks, exasperated. “I think women need to stop every now and again and say, ‘This bit is really important, so you can forget the last four hours of stuff I’ve been going on about.'”

While I have some experience with what he’s describing, I still think the reason I can’t just throw away a cereal box with five Cheerios left in it lies in the fuzzy area between remembering and caring. So I decided to dig up some of those studies Diane always throws in my face about men’s and women’s memories and brains. It turns out that the most current work focuses less on brain capacity and more on the gender differences in wiring, especially for cognition and memory. The research shows that women have better “emotional memories” and better “autobiographical memories” than men.

This would support a theory I like: Men are physiologically programmed not to remember that they are supposed to care about stuff like the final resting place of their socks. (On a more serious note, the researchers speculate that having a better emotional memory is one reason women suffer from depression more than men.)

I found another aspect of this study especially revealing. This particular research was done by showing groups of men and women the same series of images and then asking three weeks later what they remembered about them. Apparently, the women found four specific pictures the most emotionally intense. Dead bodies. Gravestones. Crying people. And a dirty toilet.

The women found a dirty toilet as emotionally intense as a dead body.

So, here’s my query to Diane: It’s bad enough that you’re burdened with this horrific association; is it something you really wish on me?

Her answer, of course, is yes.