Home / 1941 / Who Knew?!: This Penn Alum invented my favorite snackfood (and probably yours too!)

Who Knew?!: This Penn Alum invented my favorite snackfood (and probably yours too!)

Last week Kiera Reilly (C’93) sent me an obituary of a very notable Wharton alum who passed away a few weeks ago.

The obituary revealed that this alum was the inventor of a food so delicious, you just can’t eat one…

Find out more about this alum and the food he invented after the jump! 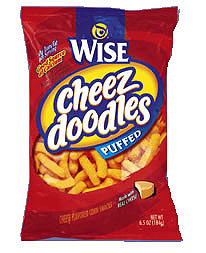 Per the LA Times,

>
“Morrie Yohai, the creator of Cheez Doodles, dies at 90

Yohai developed the snack in the 1950s for Old London Foods, based in New York City. The company founded by his father already was selling Dipsy Doodles rippled corn chips, which were made with a machine that spit them out under pressure.

His son Robbie Yohai said his father applied a similar concept for Cheez Doodles, adapting the machine to extrude liquefied cornmeal into a tubular shape. The shapes were then coated with seasoning and cheese.

Born March 4, 1920, in Harlem, Yohai studied business at the Wharton School of the University of Pennsylvania. After graduating in 1941, he went to work for the Grumman aircraft company on Long Island. He enlisted in the Navy, then transferred to the Marine Corps and served in the Pacific during World War II.

After the war, he took over his father’s snack food factory in the Bronx, where they also produced popcorn, Melba toast and other savory treats. Yohai sold the company to Borden Inc. in the 1960s and remained with the company until it relocated to Ohio.
He then taught at the New York Institute of Technology on Long Island and eventually became associate dean of its business school.”
Our condolences from DT to the Yohai family.

Check back next week when I reveal another alum (living) who runs the company of one of my favorite desserts of all times!